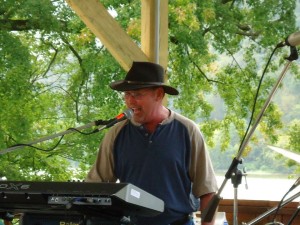 Stephen Poole was born September 19, 1953 in London, England, United Kingdom to parents Jack and Janet Poole who were living in England at the time due to Jack serving with the U.S. Navy and stationed in England.  Stephen and his wife, Peg Fultz Poole are both graduates of East Liverpool High School; Stephen (Class of 1971) and Peg (Class of 1984).

Stephen says his mother, Janet always played records in the house and told him he started singing at the age of 18 months. Stephen says he became even more interested in music by the time he was in 4th or 5th grade while listening to his Uncle Kenny’s Peter, Paul and Mary records.  He learned how to play guitar on an old acoustic guitar which he had purchased himself.

Stephen bought his first Electric Guitar from Bill Brown’s Musicland in downtown East Liverpool, by saving the money he earned washing cars at Lawson’s Gas Station.  Stephen said he tried to get guitar lessons from the school but they didn’t offer lessons for guitar so he took up playing the trumpet from 5th Grade throughout his Senior Year of High school.  He learned to read music and eventually got back to playing guitar in the Pep Band and also played guitar in three Junior Miss Pageants during school and after graduating High School.

One of Stephen’s first paying gigs, while he was in 7th grade, was playing for a 9th Grade Dance.  His first band was called “The Poor Little Rich Kids” which included fellow musicians Keith Williams and Ryan Reed. His next band, during High School, was called “Wheel of Fortune” and included fellow musicians Chuck Standley, George Garner and Ryan Reed.  Other bands Stephen was a member of during school were “Outer Limits” and “Purple Haze.”  He says that there are probably a few more he may not remember.

In 1977, Stephen formed the “Eclipse” band with his good friends Tom Coplin and Ryan Reed.  They added member Joe Foutts through Dale Jones.  When Joe left Eclipse, they recruited Mark Deitch.   Joe Foutts then returned to the band and the Eclipse Band was now set.  Eclipse was very well known, adding members Mark Owen and Fred Ludovici and stayed strong and steady until 1984.  Eclipse played at numerous events (including bars) and countless wedding receptions until it disbanded in 1984. Stephen says that even to this day he still has couples that walk up to him asking the question, “Do you remember us? Eclipse played at our Wedding.” Stephen says, “This still puts a smile on my face as it is still nice to see how many of those couples have remained together and stood the test of time.”

Stephen stopped playing music for the next 17 years so he could watch his children grow up. He says the early to mid-2000’s was a very difficult time for him, at which time he had fallen into deep despair.   One day somebody told him his old friend Fred Ludovici was playing at Hot Shots in Chester, so he went to see him and by doing so, thinks that is what brought music back into his life. He bought an acoustic guitar and started playing a few jobs with Fred and things started looking up for him.   Stephen says that music puts him in a better state of mind.  He then decided to switch from guitar to playing the keyboards, in order to give them a little more dimension.  Stephen and Fred then went on to form the band “Taylors Bend” with members Chris Frederick on drums and Randy Berill on bass guitar, which lasted for a short while until he and Fred formed the band “X-Zit” in 2006, which included his old friends, Tom Coplin on drums and Ryan Reed on bass guitar.  Ryan left the band and they somehow found Chuck Riska to play bass guitar.  They also had local musician Greg Dray playing bass guitar with them.

On a cool night, January 9th 2005, late in the evening, Stephen was at his friend Ed’s house on Ohio Avenue, watching the Ohio River which was high and moving swiftly and said he got a very eerie feeling that something had happened on the river, but had no idea what it was. He said he went home and went to bed with this troubled, gut feeling and woke the next morning to learn that the riverboat “Elizabeth M” had gone over the Montgomery Lock and Dam the night before.  Men were missing. He started writing a song about the men that were on the boat.  Stephen said that the only thing that kept running through his mind was “God Save the Elizabeth M” and that was all he could think about.   Once his song was complete, he went and spoke with Fred Miller at The Review and The Review put his song on their Website for a while. He got a pretty good response from his song.  Stephen and Fred performed that song and got a standing ovation in response.  His wife, Peg says he derives his song writing abilities from tragedies that have happened throughout his life.

Stephen joined the “Romeo Sabatini Band” with members Jerry Romeo, Jim Sabatini, Dan Tharp on bass guitar and Bill Reed on drums.  The Band later turned into “The Sara Michelle Band.”  Sara was a young and powerful female singer from Erie, PA.  They had some great gigs.  At the same time, in the year 2010, Stephen was working with Fred on his next album titled “Beyond The Hollow.”  He then went on to join the band “Route 45,” playing the keyboards for them over the next year or so.

Stephen is currently playing with the “Mad River Men” also known as “MRM” which includes members Fred Ludovici on guitar, John Ash on drums, Chuck Riska on bass and Stephen on keyboards.  Sometimes they play as the band “Kryton” when they add guitarist, Jeff Creighton.  Stephen says he’s not able to mention everyone, but says he has been fortunate enough to play with the best musicians this area has to offer.  There are probably other bands he and his friends tried to start, but never followed through.

Lately, Stephen has been working on various projects with Kent Cox, Sharyn Vinci and Promoter Randy Barnard and you may also see him pop in and out of other bands to fill in from time to time. He says that not many people realize this about him, but he can actually sing, as well as play guitar.  His wife, Peg says he has an amazing voice. Most people are caught completely off guard when they hear Stephen sing because they never knew he could.  The drums are one of the few instruments he says he hasn’t been able to master…yet.

Stephen says, “Even though there is something wrong with all of us musicians, (little quirks shall we say), it’s all because of the true love of playing music and performing.  I consider this one of my True Passions…it is truly a part of my Soul. I feel have been truly blessed in my life for having the ability to do what I love to do… play music, and I would just like to say a great big “Thank You” for supporting me for all these years.”

Stephen currently resides in East Liverpool, Ohio, with his wife of 10 years, Peg, where they watch over and enjoy life with, their 5 children and 10 grandchildren.

Pay attention, you just never know where you will see Stephen playing next!